About Friends of Exmoor Pony Society 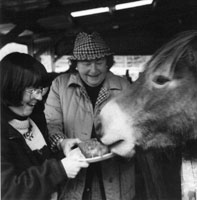 It was founded in 1979 by the late Mrs. Creenagh Mitchell of Knighton, Withypool and Dr. Sue Baker (nee Gates), initially as an independent group. Their initial aim was to simply raise some much needed funding for the Society and in the first year the sum of £1,000 was achieved. Whilst part of this was donated to the Exmoor Pony Society (EPS), they decided to put the rest of it “to work”. Having purchased a covered stand, made display boards and obtained Exmoor pony items such as key rings, mugs etc., they and a small band of enthusiasts began attending agricultural shows and various events.

The aim was and continues to be to combine further fund-raising with actively promoting the ponies.

For some years, the money raised was invested and the interest given to the EPS.

In 1995, when the EPS became a company, the opportunity was taken to bring Friends formally within the Society’s operations.

Whilst retaining its name, Friends became a subsidiary wholly owned by the Exmoor Pony Society.

The Friends stand may be seen at some county shows, some of the Area Shows, the British Equine Event plus many other smaller events. What began with selling raffle tickets on a card table has grown into a highly professional display and in 1996, the 75th anniversary year of EPS, a special display vehicle was bought after much fund-raising by the EPS and with sponsorship by Inch’s Cider.

Friends depends upon the tireless efforts of a small group of people and so welcomes offers of help from new members in running the stand.